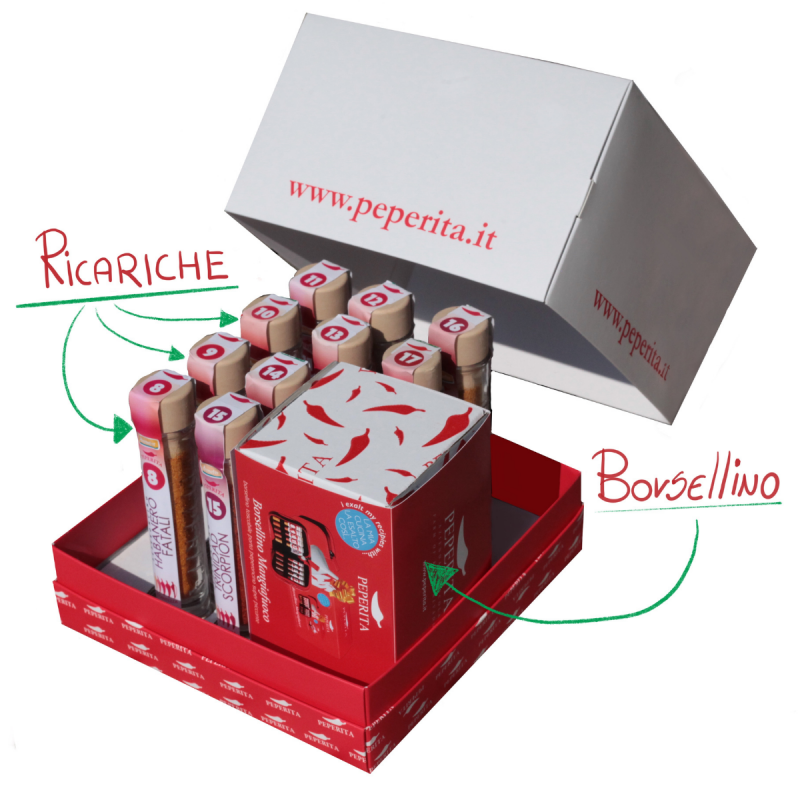 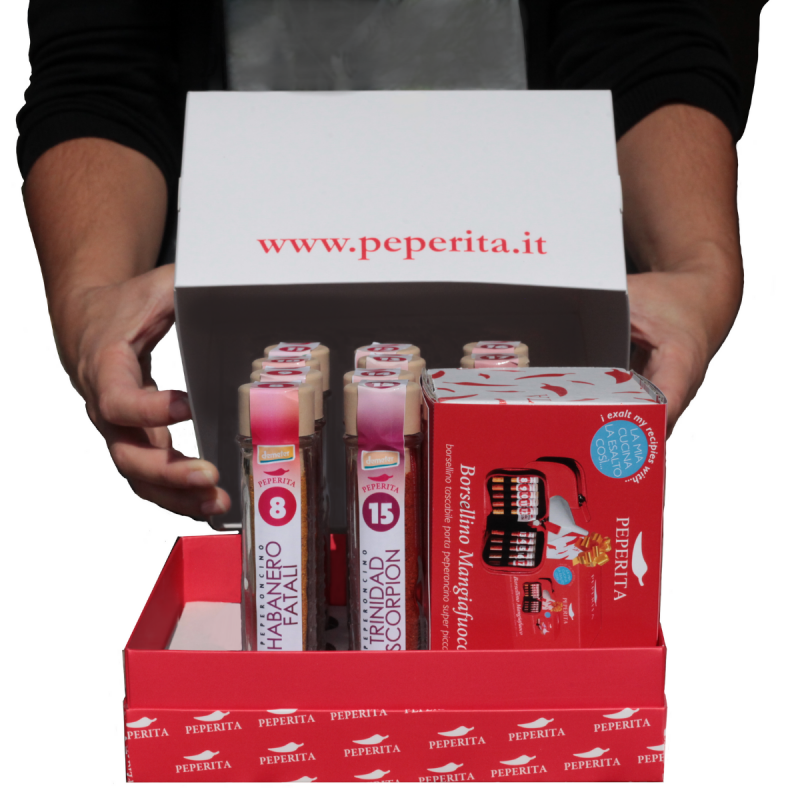 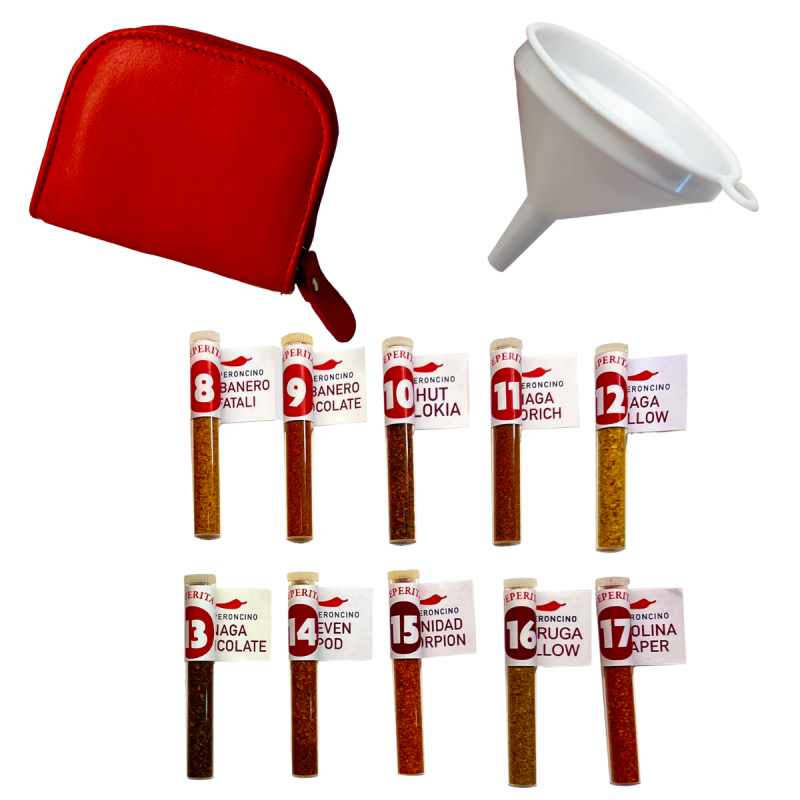 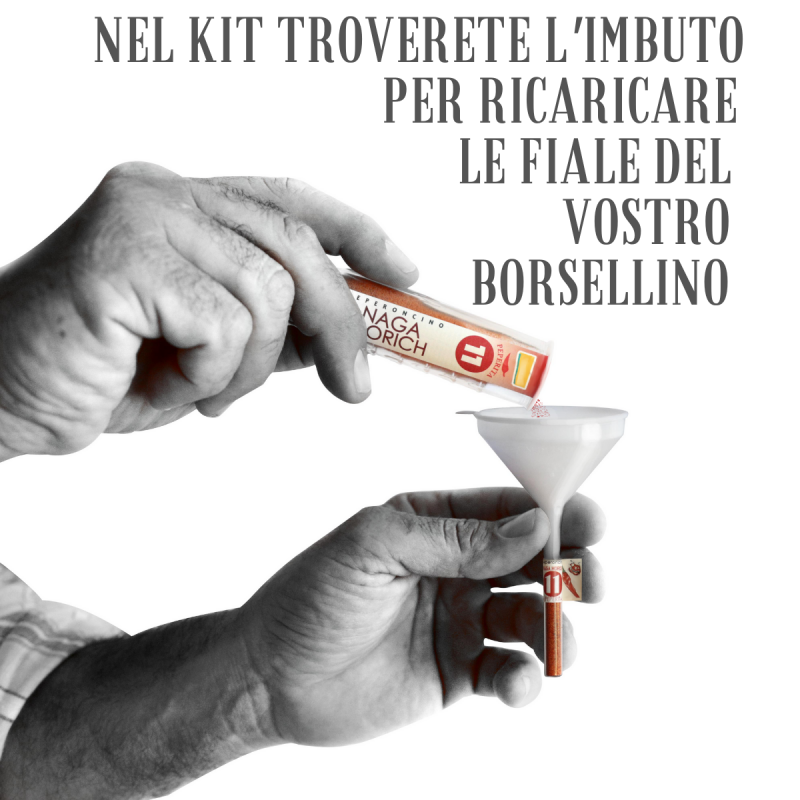 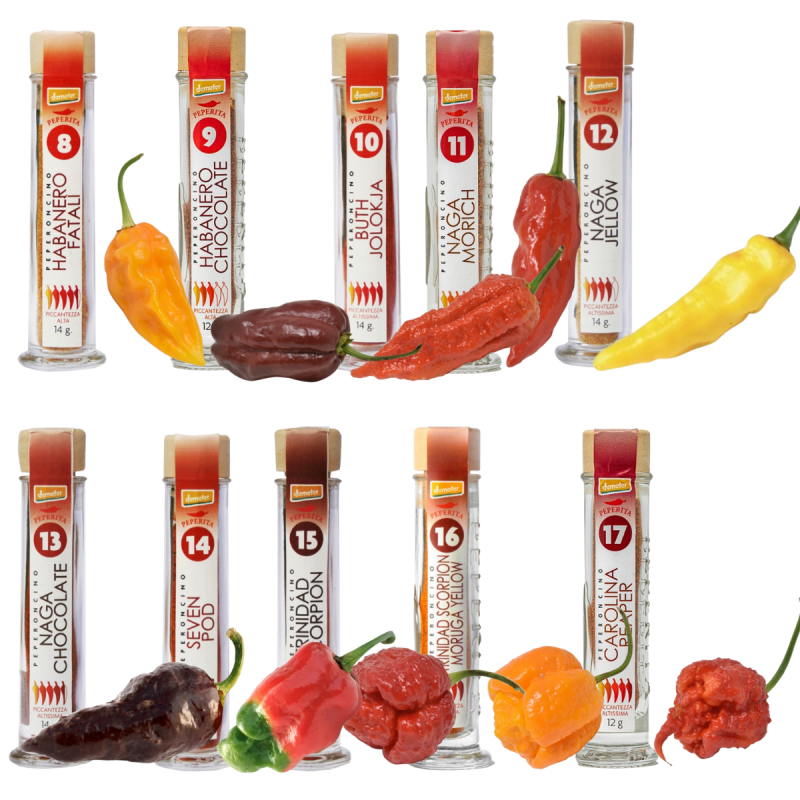 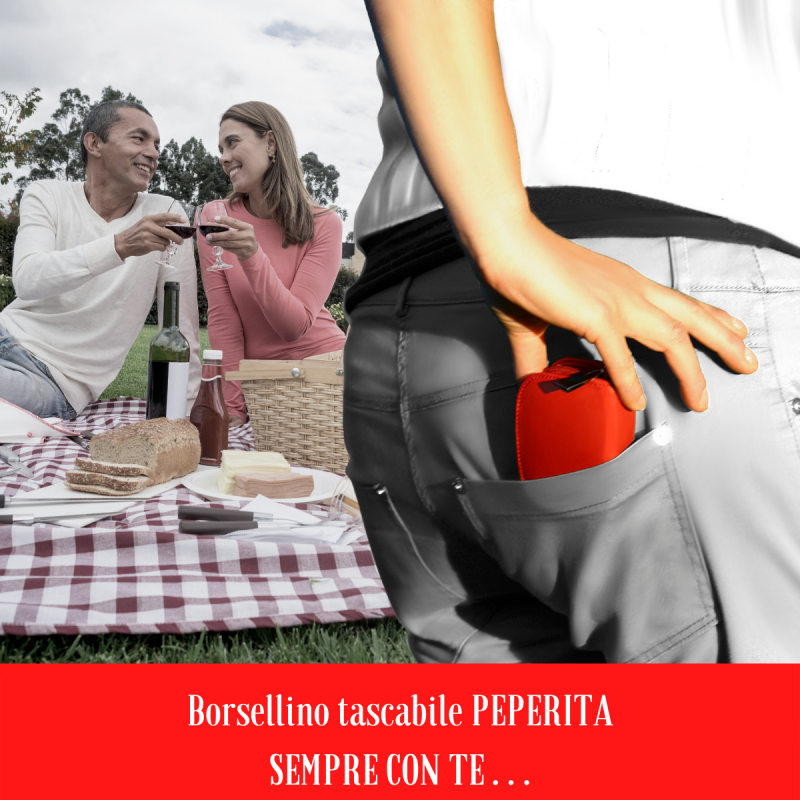 HABANERO CHILI POWDER FATALI N.8
Habanero Fatali is native to Mexico and the Caribbean. The berry is green and late ripening, when it turns yellow. Elongated shape thinner at the apex, which reaches 8.5 cm in length by 2.5 cm in width. Like the other Habanero peppers, in addition to being among the best known in the world, it has a very intense and unmistakable fragrance that comes from the fusion of over 180 essential oils it contains. Very complex bouquet of yellow pepper, vanilla, balsamic herbs, leather, wax and sage. With accentuated spiciness and hints of tropical fruit, papaya. Use Habanero Fatali as a spice. Excellent with seafood salads, boiled fish with mayonnaise, spaghetti with pistachio or paccheri with ricotta and pecorino fondue. Try also with vegetable pies, pigeon ragu and with bitter chocolate pralines. Dissolve a small amount of powder in a little extra virgin olive oil and then season the dishes you want. Even spaghetti with garlic, oil and chilli are fantastic with this chilli pepper with an intense aroma, taste and spiciness. Mixed with a jam it is excellent to add to ice creams, in particular on melon or vanilla ice cream.

HABANERO CHOCOLATE CHILI POWDER N.9
This chilli is called 'Chocolate' because the color of the berry changes from green to brown when it completes ripening. Lantern-shaped like the Red Savina, about 4-6cm long and 2.5cm to 5cm wide. Late ripening. Herbaceous flavor with aromatic notes of toast, olive paste, mahogany wood. Although it belongs to the Habanero family, it does not have a strong spiciness but the property of enhancing the flavors of the dish it is combined with. It goes perfectly with many recipes. In particular with tomato and seafood soups, vegetable flan, ribollita, carbonara, Chianina stew in sauce, pan-fried pigeon, grilled, sacher cake and with chocolate in general.

BHUT JOLOKIA CHILI POWDER N.10
Of Indian origin, in Indi Bhut Jolokia means ghost pepper but is also known as snake or poisonous pepper. Berry with a conical and rounded shape at the end up to 4 cm long by 2 cm wide. The color starts from immature green to deep red. Creamy but vegetal smell, dried tomato, rust, juniper berry, bay leaf with shoe wax base. Strong spiciness with a strong tomato and tree bark flavor. In the end it turns towards bitter chocolate, For three years it has been judged the hottest in the world by the Guinness Book of Records. To be paired with Chianina tartare and meat sauce.

NAGA MORICH CHILI POWDER N.11
The Naga Morich has a conical and rounded berry at the end up to 4cm long by 2cm wide. The mature color is bright crimson red. Originally from Assam and Bangladesh. In Sanskrit its name "Naga" means cobra probably because it has the characteristic of letting its refined and sweet flavor be felt before the spiciness is felt. While fighting for primacy as the hottest chili pepper in the world, it remains the super hot with the most interesting flavor. Herbaceous, sweet and fruity aroma with a scent of lemon peel and tropical wood. The spicy phase occurs with delay accompanied by moderate vegetal notes and sweet hints almost of butter. Perfect for enhancing dishes with complex flavors, such as slow-cooked meats and ragù.

NAGA YELLOW CHILI POWDER N.12
The Naga Yellow has a conical and rounded berry at the end up to 4cm long by 2cm wide. The mature color is intense yellow. Vegetable flavor like yellow pepper and yogurt. On entering the mouth it has a sweet sensation and then reveals a very strong spicy with notes of straw and dry hay. Match with mixed boiled fish with mayonnaise and mustard, parmesan and chianina ravioli with salted butter and scorzone or chianina stews with saffron rice and carbonara.

NAGA CHOCOLATE CHILI POWDER N.13
Naga Chocolate Chili Pepper nicknamed the "Black Fire", belongs to the Naga family with the characteristic that besides being very spicy it goes well with many recipes. If tasted alone it has a strong and bitter scent, combined with sauces, braised meats, roasts and even desserts it reveals an unexpected sweet fiery spiciness.

SEVEN POD CHILI POWDER N.14
The Seven Pod is a Capsicum chinense native to the islands of Trinidad and Tobago. The name of the chili derives from the fact that its spiciness equals that of 7 chili peppers and that only one Seven Pod can spice up to 7 pots of beans.
It seems that during the 17th century in the Caribbean Islands, pirates and poachers exhausted from years and years of wars wanted something that could add some fire to their stews and pots of beans…
This chili pepper is extremely rare and extremely spicy! When unripe, the fruit is yellow, orange and green, while near the end of maturation it’s characterized by a darker brown colour and a very wrinkley surface. It can reach 1,800,000 SHU.

TRINIDAD SCORPION CHILI POWDER N. 15
The Trinidad Scorpion is a variety of the Capsicum chinense species. Native to the Moruga district of the island of Trinidad and Tobago (archipelago of the Lesser Antilles), the fruit is characterized by the pointy tail (hence the name Scorpion) and the bright red/orange colour. Before the advent of the Carolina Reaper (March 2011), it was considered to be the hottest chilli in the world, with a minimum of 1.500.000 SHU.

TRINIDAD SCORPION MORUGA YELLOW CHILI POWDER CHILI POWDER N. 16
The Trinitad Scorpion Moruga Yellow is native to the Moruga district of the islands of Trinidad and Tobago. Its colour is of an intense yellow, and it’s roundish in shape with a small tail at the base that reminds that of a scorpion. It’s considered one of the top five hottest chili peppers in the world. In fact, it reaches a considerable degree of spiciness for all true fans of spices: 2.000.000 SHU.

CAROLINA REAPER CHILI POWDER N. 17
The Carolina Reaper or Carolina Reaper Smokin'Ed chili pepper with its 1,569,300 ° / 2,200,000 ° SHU Scoville in 2013 was officially proclaimed the hottest pepper in the world by rightfully entering the Guinness World Record. The Carolina Reaper chilli is an intense red, round in shape at its lower end with a tail that resembles that of a scorpion, it takes 90 days to reach full ripeness. On the palate it is extremely spicy with a fruity taste with notes of chocolate and cinnamon. In the mouth there is a gradual sensation of long-lasting heat that descends to the nose and throat. in the kitchen, if used in moderation and wisely combined, it is a real panacea for health as it is rich in vitamin A which helps to keep eyes, hair and skin in perfect health. it also has stimulating, antiseptic, disinfectant and digestive properties.