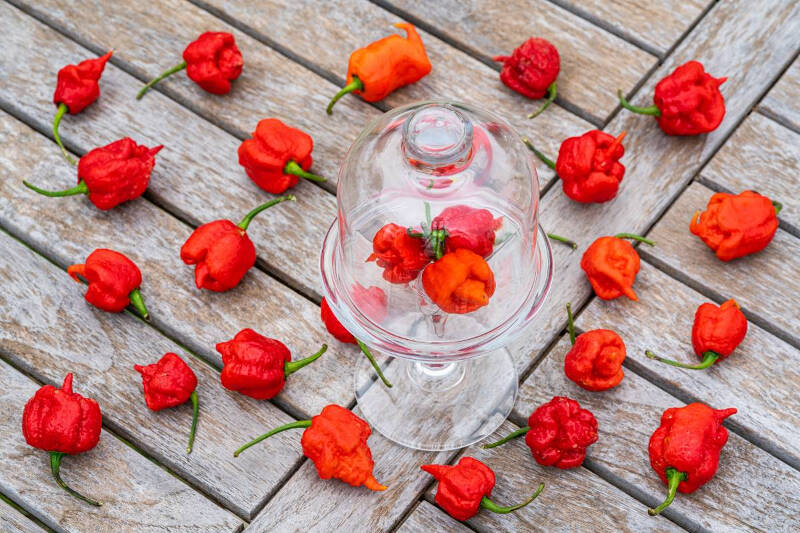 Storage
Keep cool and away from light sources. Once opened, do not store in the fridge.

On the palate it is extremely spicy, with a fruity taste with notes of chocolate and cinnamon. In the mouth it gradually releases a long-lasting sensation of heat that descends to affect the nose and throat. In the kitchen, it should be used in moderation and when combined wisely, it enhances the flavor of grilled meats, stewed game, pizza and spaghetti. It is ideal for making exotic sauces and those intended for BBQ.

The Carolina Reaper or Carolina Reaper Smokin'Ed with its high degree of spiciness can reach up to 2,200,000 SHU (Scoville Heat Units). In 2013 it was officially proclaimed the hottest pepper in the world, entering the Guinness World Record by right.
The Carolina Reaper chilli is an intense red, with a rounded shape. Its lower end extends with a tail that resembles that of a scorpion.

During the production process of this powder, special cold moisture extraction techniques were adopted, allowing the characteristic aromas of chilli to be kept as unaltered as possible.

From the health point of view, the Carolina Reaper is a real panacea as it contains Vitamin A which helps keep eyes, hair and skin in perfect health and above all it contains Vitamin C, which does not just stop the spread of free radicals, but it is useful and necessary to reinforce the barriers of the immune system, lowering the risk of the onset of tumors by inhibiting the synthesis of carcinogenic substances. Furthermore, recent studies scientifically confirm that using chili peppers in our diet at least 4 times a week halves the risk of heart attack.
Ulteriori informazioni su questo testo di originePer avere ulteriori informazioni sulla traduzione è necessario il testo di origine